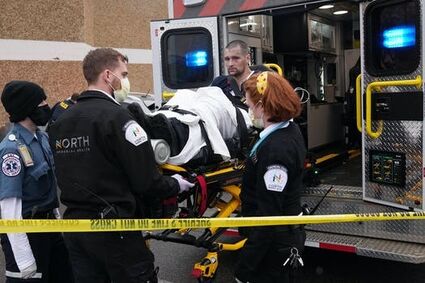 Paramedics transferred a suspect in a fatal Minneapolis shooting from a squad car to an awaiting ambulance last November. State leaders have competing ideas on how to address violent crime.

Contrasting visions for how to address Minnesota's enduring violent crime wave are now on a collision course in the final weeks of the legislative session.

House DFLers and Democratic Gov. Tim Walz are looking to community-centered solutions while the Senate GOP plans to pass a public safety spending bill this week focusing on tougher penalties. The two competing packages on a top legislative priority for both parties will be hashed out at a time when the topic has prompted more partisan warfare than compromise.

"We come at this problem with two different philosophical approaches: I recognize we have an immediate violent crime problem in the state of Minnesota," said state Sen. Warren Limmer, R-Maple Grove, lead sponsor of the Senate's proposal, during a news conference this month. "We have a little extra money to devote toward protecting our citizens. This is not the time to build big, ivory-tower bureaucracies."