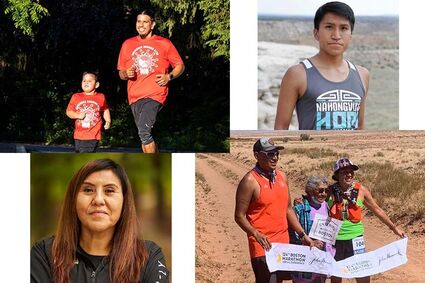 After two turbulent years, the 126th Boston Marathon returns to its traditional start on the third Monday in April, and Native runners from across Indian Country will be competing.

Much of the early history of the Boston Marathon has strong ties to Indian Country. Native runners would take on the Boston Marathon with aspirations of getting into the Olympic marathon. Many Native runners have had success at the race, with five Native runners medaling in the marathon's history: Bill Davis (Mohawk), Tom Longboat (Onondaga), Andrew Sockalexis (Penobscot), Ellison Brown (Narragansett), and Patti Lyons Catalano (Micmac). Iconic Native performances at the Boston Marathon have shaped race: Perhaps the most iconic – and challenging – section of the course, "Heartbreak Hill," is named after Narragansett tribal member Ellison "Tarzan" Brown's legendary victory in 1936. It was here Brown, condescendingly challenged by local favorite John Kelley, passed the Irish American to win the race–thus "Breaking Kelley's heart" at this section of the race.

Monday's marathon course traverses the homelands of the Mashpee Wampanoag, the Massachusett, and the Pawtucket people, beginning in what is now Hopkinton, Mass. and finishing on Boylston Street in Boston. Marathoners run east towards the sunrise – a morning tradition for the Navajo and other Indigenous peoples. In a region of the country that has long heralded the colonial, settler history, last year's race was held on Indigenous Peoples' Day. After many called for the marathon to be rescheduled, the Boston Athletic Association's (B.A.A.) chairman apologized and began the marathon by reading a land acknowledgment statement. In addition, the B.A.A. featured a mural at Copley Square Park that highlighted previous Indigenous runners – completed by artists Yatika Star Fields (Osage, Cherokee and Muskogee Creek) and Robert Peters (Mashpee Wampanoag).