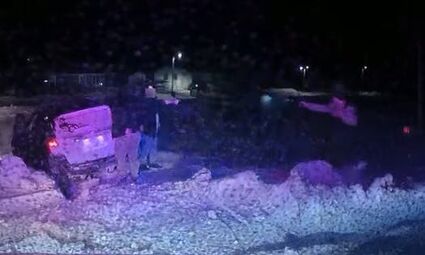 A still from squad-cam video showed Mahnomen County Sheriff's Deputy Dakota Czerny, right, shooting at a passenger who produced a gun after a pursuit March 13.

A northern Minnesota sheriff released video footage Wednesday of a deputy shooting a woman last month and in a statement countered criticism the deputy received on social media.

Police say Mahnomen County Sheriff's Deputy Dakota Czerny was called to the area about 1:30 a.m. March 13 near the village of Naytahwaush to assist another deputy with a traffic stop that turned into a pursuit, according to a statement from Sheriff Josh Guenther on social media Wednesday. Czerny used an intervention technique that sent the suspect vehicle into a ditch.

Czerny was placing handcuffs on another person standing outside the suspect vehicle when he saw passenger Shequoya Deanne Basswood, 20, with a gun and retreated backwards, according to Guenther's statement.