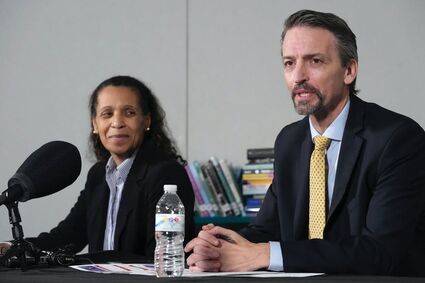 Minneapolis Public Schools officials have begun discussing the financial implications of the new contracts with the Minneapolis Federation of Teachers. In this photo from March, Superintendent Ed Graff and School Board Chair Kim Ellison announced the tentative contract agreements.

The tentative contract agreements with the Minneapolis Federation of Teachers, which still require school board approval, were reached after months of stalled negotiations and a three-week teachers strike in March.

The price, revealed at a school board finance committee meeting Wednesday, would be an extra $53.1 million for the current school year and an additional $27.1 million in the 2022-23 school year.