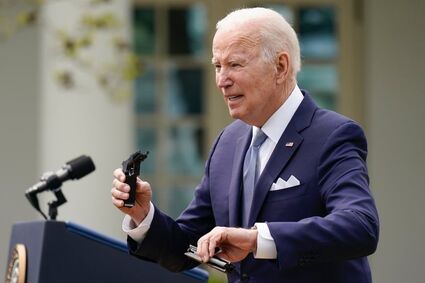 President Joe Biden holds pieces of a 9mm pistol as he speaks in the Rose Garden of the White House in Washington, Monday, April 11, 2022. Biden announced a final version of the administration's ghost gun rule, which comes with the White House and the Justice Department under growing pressure to crack down on gun deaths.

WASHINGTON - President Joe Biden on Monday took fresh aim at ghost guns, the privately made firearms without serial numbers that are increasingly cropping up in violent crimes, as he struggles to break past gun-control opposition to address firearm deaths.

Speaking at the White House, Biden highlighted the Justice Department's work to finalize new regulations to crack down on ghost guns, and announced the nomination of Steve Dettelbach, who served as a U.S. attorney in Ohio from 2009 to 2016, to run the Bureau of Alcohol, Tobacco, Firearms and Explosives.

"Law enforcement is sounding the alarm," Biden said of ghost guns, briefly holding one up for cameras to see in the Rose Garden. "Our communities are paying the price."