Russian forces have taken many bodies to a huge shopping center where there are storage facilities and refrigerators, the mayor said 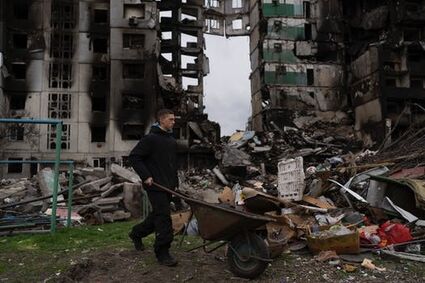 A young man pushes a wheelbarrow in front of a destroyed apartment building in the town of Borodyanka, Ukraine, on Sunday, April 10, 2022.

KYIV, Ukraine - The mayor of the Ukrainian port city of Mariupol said Monday that more than 10,000 civilians have died in the Russian siege of his city, and that the death toll could surpass 20,000, as weeks of attacks and privation leave the bodies of Mariupol's people "carpeted through the streets."

Speaking by phone Monday with The Associated Press, Mayor Vadym Boychenko also accused Russian forces of having blocked weeks of thwarted humanitarian convoys into the city in an attempt to conceal the carnage there from the outside world.

Mariupol has been cut off by Russian attacks that began soon after Russian President Vladimir Putin launched the invasion of Ukraine in late February, and has suffered some of the most brutal assaults of the war. Boychenko gave new details of recent allegations by Ukrainian officials that Russian forces have brought mobile cremation equipment to Mariupol to dispose of the corpses of victims of the siege.