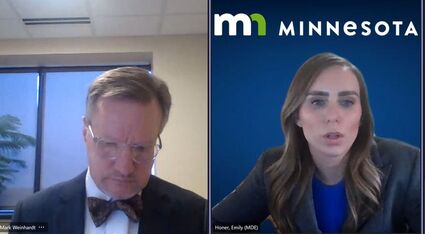 At a virtual hearing on April 7 for Partners in Quality Care to appeal the funding suspension from the Minnesota Department of Education, Mark Weinhardt, left, represented the nonprofit while Emily Honer, right, made the state's case for the suspension.

To state regulators, three FBI search warrants filed in January are proof that a St. Paul nonprofit failed to police its contractors distributing federally funded meals to poor children, allowing millions of dollars to be stolen from the government. As a result, the state argued at a hearing Thursday, the nonprofit Partners in Nutrition and its leaders should be permanently banned from federal meal programs.

But lawyers for the nonprofit said the search warrants prove nothing and are being used to help the state agency deal with the "embarrassment" of being duped by other meal providers caught up in a massive federal fraud investigation.

Those arguments frame the battle over the future of Partners in Nutrition - also known as Partners in Quality Care - one of the state's largest providers of meals to needy children. In 2021, the nonprofit collected more than $190 million, up from $20.5 million in 2020, according to the Minnesota Department of Education (MDE). It began sponsoring meal programs in 2016.