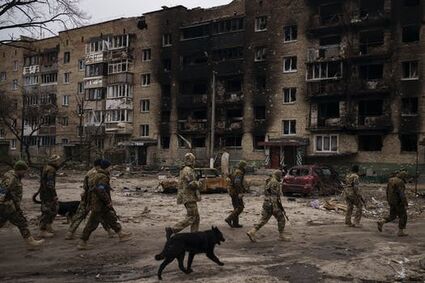 CHERNIHIV, Ukraine - Russian troops retreating from this northern Ukrainian city left behind crushed buildings, streets littered with destroyed cars and residents in dire need of food and other aid - images that added fuel to Kyiv's calls Thursday for more Western help to halt Moscow's next offensive.

Dozens of people lined up to receive bread, diapers and medicine from vans parked outside a shattered school now serving as an aid-distribution point in Chernihiv, which Russian forces besieged for weeks as part of their attempt to sweep south towards the capital before retreating.

The city's streets are lined with shelled homes and apartment buildings with missing roofs or walls. A chalk message on the blackboard in one classroom still reads: "Wednesday the 23rd of February - class work."