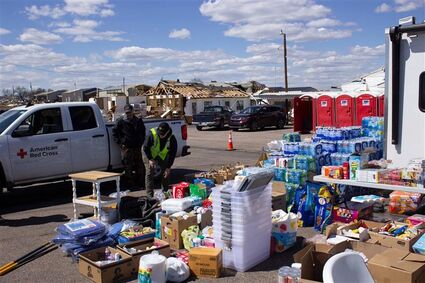 Nearly 240 homes in Marshall County were damaged or destroyed. Officials estimate that nearly 20 people were hurt, with five taken by ambulance to hospitals. Of the 16,000 residents of Marshall County, 7,000 lost power.

Several area relief organizations rallied to the request for aid. The Chickasaw Nation Emergency Management Command Center served as a logistics area where information about the event was received and transmitted. The groups were sent to identified areas for relief and clean up. The command center also became a drop off point for prepared meals for workers and victims without homes or power, equipment and supplies for cleanup. Workers also checked in and received work assignments at that location.

The Chickasaw Nation Emergency Management team provided the resources to collaborate as a team and organized a coordinated plan of action between all first responders and volunteer agencies. The coordinated response eliminated redundancy and saved resources.

"There were 79 Chickasaw citizens and 29 tribal employees in or around the path of the storm," Cash said. "The Chickasaw Nation Children's Village was also impacted, destroying the agricultural building and several vehicles."

According to Cash, sharing equipment needed for response and recovery efforts is part of the job.

"The Chickasaw Nation has provided everything," Robinson said. "They have provided a command center, drones, support. The list goes on and on." He added that updated maps of the Buncombe area provided by Chickasaw Nation Emergency Management were very helpful.

"I had big sheets and 8-by-11 maps to share," he said. "These maps are more up to date than what we previously used. I will reach out to the Chickasaw Nation every opportunity I can."

The Chickasaw Nation Emergency Management Mobile Command Center and drones have proven to be an invaluable tool to response and recovery efforts. The small, unassuming generated power trailer packs technology and communications, which enable first responders to have a better picture and strategy of the response efforts. The drones give an aerial view of the impact area that enables command and control to direct resources to those affected areas. This saves time and resources.

"Our teams' primary focus was flying drones, allowing others to do the search and rescue," Cash said. "Drones eliminate so many man hours and the guesswork out of emergency management," Cash said. "We can see things like what roads are closed and obstructions on them. It gives us an overall assessment of what we are looking at, where we should put people. We are constantly an assisting agency to smaller departments that do not have a drone program."

"It was amazing how fast everything was set up," Robinson said. "Once the command center got here and power was running, everyone was on deck. The drones were up, running and searching within 30 minutes."

According to a Marshall County commissioner on scene at Buncombe Creek, the Chickasaw Nation Mobile Command Center has equipment and resources that has saved both time and potentially lives.

"The relationship we have with the tribe is good," Chris Duroy, Marshall County commissioner, district 3, said. "The command post, drones and maps provided have made things so much faster and easier for our own emergency management. It is a relief that the Chickasaw Nation is here to help."

Damage assessment provided by drones, along with other information, allowed representatives from the National Weather Service to determine the tornado that came through Buncombe Creek was an EF2. Drone footage showed the tornado's path through Marshall and Johnston counties.

According to the National Oceanic and Atmospheric Administration, EF2 tornadoes can cause damage such as roofs blown off homes, mobile homes demolished, trees uplifted and cars lifted off the ground.

"This is the most impacted area of Marshall County," Robinson said. "Yes, we got damage in other places, but this is where the major mess is. I can't speak enough about the Chickasaw Nation Emergency Management team. They set up instantly and have given me the freedom to know I have the resources I need."

The Chickasaw Nation Reentry Program provided workers for limited clean-up operations. They cleared downed trees, roadways and damaged homes within Buncombe Creek. According to Duroy, volunteers like these could go onto private property, dragging debris to the road easement for county officials to haul away.

These recovery efforts helped restore power and open roadways quicker to the residents of Marshall County.

Tornadoes were not the only natural disaster experienced within the Chickasaw Nation at the time. A day before the tornadoes affected Marshall County, a wildfire was reported in the Chickasaw National Recreational Area, Murray County. Chickasaw Nation drones and operators were requested to survey and map out the fire line. This information was used by local fire officials to place firefighters in positions to best be used. 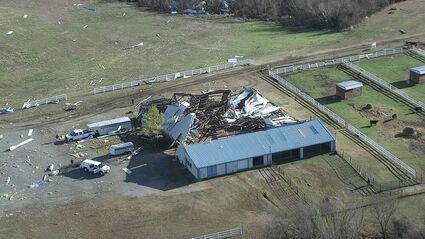 "We put together a template for standardization in emergency action plans for Chickasaw Nation facilities," Cash said. "This allows our employees to carry out fire and tornado drills in preparation for various types of incidents. For example, the children's village had just completed their tornado drills earlier in the week, so when the time came to carry out the plan, the children and staff knew exactly what to do. This creates a culture of preparedness and allows people to go into action at a moment's notice."

During disasters, information is important to the people affected. In weather emergencies, KCNP Chickasaw Community Radio can be heard on 89.5 FM in Ada, 89.3 FM in Dickson, 97.3 FM in Connerville/Tishomingo and 104.5 FM in Pauls Valley/Wynnewood.