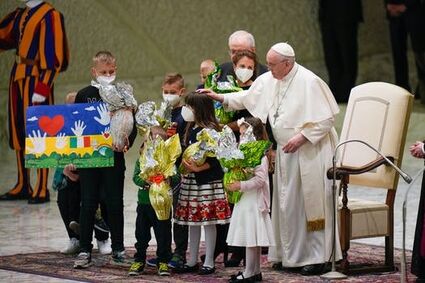 KYIV, Ukraine - Western governments prepared Wednesday to toughen sanctions against Russia and send more weapons to Ukraine, after President Volodymyr Zelenskyy pointedly accused the world of failing to end Moscow's invasion of his country and what he said was a campaign of murders, rapes and wanton destruction by Russian forces.

In scarred and silent streets of ruined towns around Ukraine's capital, investigators collected evidence documenting what appeared to be widespread killings of civilians. Specialists cleared mines from devastated towns near Kyiv that Russian troops have left, as Moscow regrouped its forces for a new assault on Ukraine's east and south at the end of the war's sixth week.

In Andriivka, a small village about 60 kilometers (40 miles) west of the capital, two police officers from the nearby town of Makariv came to identify a dead man, whose body was left in a field, next to tracks of a Russian tank left in the area.