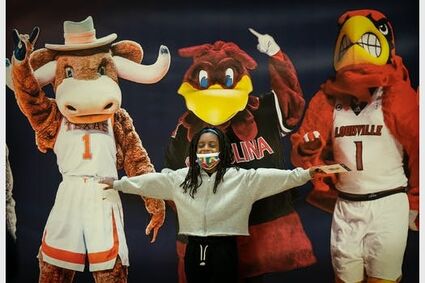 A young basketball fan posed with college mascots at the Capital One Women's Final Four activities at the Convention Center in Minneapolis.

That she did, in a game that won't soon be forgotten even though the going was tough early on for Paige Bueckers and her legions of hometown fans. The 20-year-old Hopkins High graduate and her University of Connecticut Huskies fell behind hard and fast to top-ranked South Carolina, losing 64-49 Sunday night at Target Center.

No matter. Bueckers was the favorite of the young fans who packed the lobby and sidewalk before the game for the red carpet arrival of the two star-studded women's teams.