The first two games are set for Friday; finalists will face off on Sunday 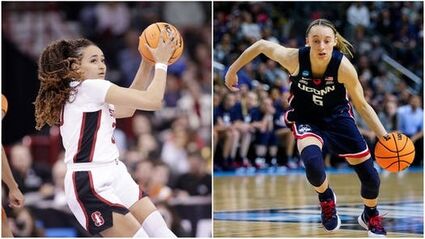 The play of two outstanding guards - Stanford's Haley Jones (left) and UConn's Paige Bueckers - will have a large impact on the outcome when the Cardinal and the Huskies meet in a Final Four semifinal Friday.

A trio of March Madness fans from the Navajo reservation in Page, Ariz., steered their rental car into a downtown Minneapolis parking ramp early Thursday, bleary from an early flight but eager for some urban exploring and their first Women's NCAA Final Four.

"We're all hoopers, that's why," said Celeste Claw, 27, explaining why she and sisters Myka Taliman, 21, and Miquedah Taliman, 18, drove four hours to Phoenix, spent the night in a hotel and caught an early flight to the Twin Cities.

The three women were among the first fans roaming the downtown streets early Thursday in a biting wind near Target Center, the epicenter of Final Four action that organizers hope will infuse energy into a city emerging from two years of a pandemic and civic unrest after the police murder of George Floyd.

Stanford is vying to become the fourth program in NCAA Division I women's basketball history to win consecutive national championships. And it's fitting the last team to accomplish such a feat is Friday's opponent, Connecticut, which did it during a four-peat from 2013-16.

The top-seeded and defending champion Cardinal (32-3) hasn't played the second-seeded Huskies (29-5) in the NCAA tournament since losing in a 2014 Final Four semifinal in Nashville.

Frontcourt foul trouble: The Cardinal is a different team when center Cameron Brink can stay on the court. The 6-4 sophomore had at least four fouls in four of the past seven games, including fouling out in a 72-66 Sweet 16 victory vs. Maryland. Brink sat with foul trouble in the first half last Sunday, but she still finished with 10 points, six rebounds and six blocks in 22 minutes to help Stanford defeat Texas 59-50 in the Elite Eight.