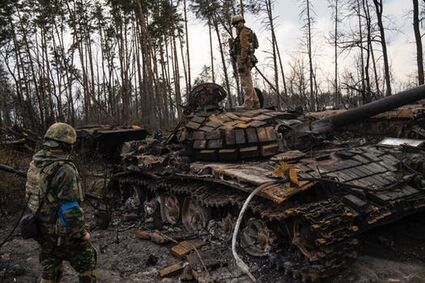 A Ukrainian soldier stands one top of a destroyed Russian tank on the outskirts of Kyiv, Ukraine, Thursday, March 31, 2022. (AP Photo/Rodrigo Abd)

KYIV, Ukraine - Russian troops began leaving the Chernobyl nuclear plant after soldiers got "significant doses" of radiation from digging trenches at the highly contaminated site, Ukraine's state power company said Thursday as fighting raged on the outskirts of Kyiv and other fronts.

Energoatom gave no details on the condition of the troops or how many were affected. But it said the Russians had dug in in the forest inside the exclusion zone around the now-closed plant, the site in 1986 of the world's worst nuclear disaster.

The troops "panicked at the first sign of illness," which "showed up very quickly," and began preparing to leave, Energoatom said.