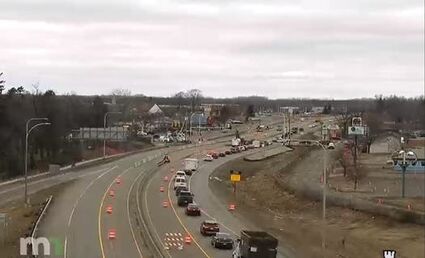 Traffic jammed up on Hwy. 10 at Greenhaven Road in Anoka where a two-year construction project has the highway reduced to one lane in each direction for the next two years.

Motorists on Hwy. 10 in Anoka are already feeling the impact of road construction as the highway has been reduced to a single lane, and over the next six months drivers on some of the metro area's busiest routes will feel it too, as the Minnesota Department of Transportation gets to work on fixing roads and bridges.

Drivers in greater Minnesota won't escape lane closures, detours and traffic delays either as the agency spends more than $1 billion statewide to carry out 235 projects announced Thursday. They include infrastructure improvements at airports, dock repairs and upgrades to transit systems.

In the metro area, a major pavement repair and resurfacing project that snarled traffic on I-94 and I-35E in downtown St. Paul last summer returns for another year. Cedar Avenue, also known as Hwy. 77, will be repaved from Minneapolis to Bloomington. Popular cabin and fishing getaway routes will be turned into cone zones as crews work to convert Hwy. 10 through Anoka into an expressway and get started on transforming Hwy. 169 into a freeway through Elk River, slimming both roads to one lane in each direction.