Paige Bueckers is right at home with the whole world watching

The little girl from Hopkins shooting buckets in the gym is now a supernova, trying to win her first national title in her hometown 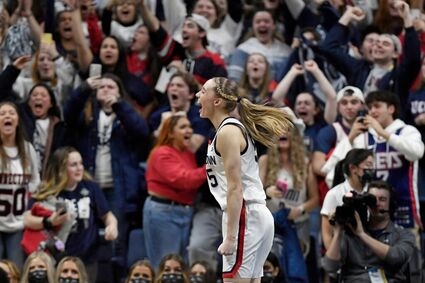 Minnesota native Paige Bueckers reacts at the end of a second-round women's college basketball game against Central Florida in the NCAA tournament.

She stood at the edge of the basketball court all by herself facing the crowd, fists clenched, arms locked, and unleashed a full-throated scream, a moment captured in a photograph that quickly went viral.

Staring back at her is a sea of faces in various forms of exaltation. Adoring fans cheering and fist-pumping and answering back with their own screams, all of them captivated by a single player. Even the opposing team's cheerleaders, sitting on the court inches from her sneakers, have their eyes locked in, staring up in wonderment.

Add that snapshot from last weekend in Connecticut to the pile of evidence, a pile stacked so high now that this is undeniable: People can't take their eyes off Paige Bueckers.