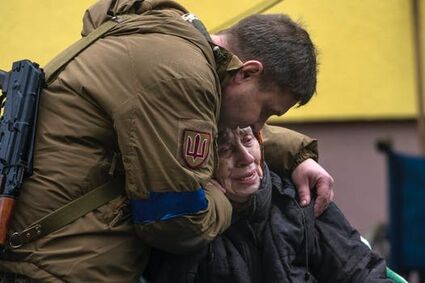 A soldier comforts Larysa Kolesnyk, 82, after she was evacuated from Irpin, on the outskirts of Kyiv, Ukraine, Wednesday, March 30, 2022. (AP Photo/Rodrigo Abd)

WASHINGTON - U.S. intelligence officials have determined that Russian President Vladimir Putin is being misinformed by advisers about his military's poor performance in Ukraine, according to the White House. The advisers are scared to tell him the truth, the intel says.

The findings, recently declassified, indicate that Putin is aware of the situation on information coming to him and there now is persistent tension between him and senior Russian military officials.

The U.S. believes Putin is being misled not only about his military's performance but also "how the Russian economy is being crippled by sanctions because, again, his senior advisers are too afraid to tell him the truth," White House communications director Kate Bedingfield said Wednesday.