Meet the teams in the Women's Final Four 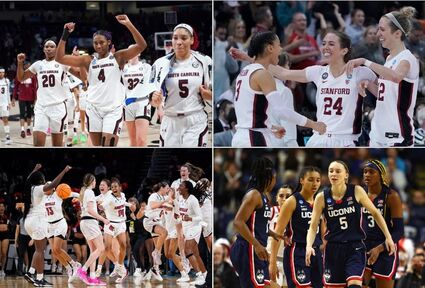 They cut down the nets in their region finals but only one of South Carolina, Louisville, Stanford or UConn will walk out of Target Center a champion.

They come from four states, representing four big-school conferences. They are Huskies and Cardinals and Gamecocks and Cardinal (with an iconic tree thrown in for good measure).

The teams arriving here for the 2022 Women's Final Four in downtown Minneapolis boast impressive resumes with different backgrounds. They strive for one common goal Sunday evening when the confetti drops: win.

No. 1 seeds South Carolina, Louisville and Stanford will be joined by No. 2 seed Connecticut for this week's event. Here's a closer look at the four teams and their fan bases coming to town to cheer the roof off Target Center.