3 dead in snowy pileup of dozens of vehicles in Pennsylvania 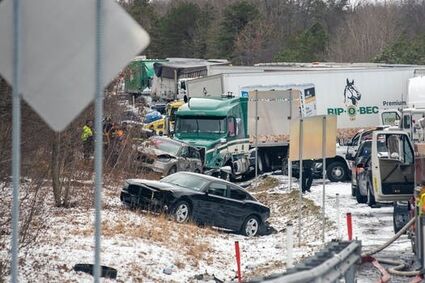 Cars are piled up on and off the road following a multi-vehicle crash on Interstate 81 North near the Minersville exit in Foster Township, Pa., Monday, March 28, 2022.

POTTSVILLE, Pa. - Tractor-trailers and other vehicles lost control and slammed into each other, people leapt away from careering trucks seconds before collision and at least three people were killed and more than a dozen others injured during a snow squall on a Pennsylvania highway Monday.

The crash on Interstate 81 was captured in videos posted on social media that show drivers and passengers lining the snowy road and jumping out of the way as a cascade of crashes unfolds.

Dr. David J. Moylan, the Schuylkill County coroner, said three fatalities had been confirmed by late afternoon and that number could rise because fires were impeding rescuers.