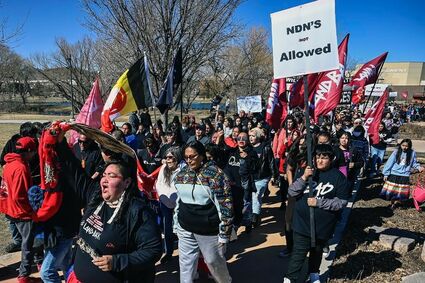 Hundreds, including Candi Brings, bottom left, march from Memorial Park to the Andrew W. Bogue Federal building on Wednesday, March 23, 2022, in Rapid City, S.D., where it was announced that a federal civil rights lawsuit was filed against the Grand Gateway Hotel for denying services to Native Americans. The rally comes just days after a shooting early Saturday morning at the hotel.

A recent social media post by a hotel owner in Rapid City, South Dakota, announcing that Native Americans would be barred from the business after a shooting in one of the hotel's rooms has prompted swift condemnation from community leaders, a protest and a federal civil rights lawsuit.

The owner, Connie Uhre, was upset about an attack at the 132-room Grand Gateway Hotel early March 19 in which the gunman and victim were both Native American. She also voiced more general concerns about what she described as increasing crime in the city.

"We will no longer allow any Native American on property," Uhre, 76, wrote on Facebook on March 20. "Or in Cheers Sports Bar," she said, referring to the on-site lounge where karaoke takes place six days a week. "Natives killing Natives."