The messages, 29 in all, reveal an extraordinary pipeline between the wife of a Supreme Court justice and President Donald Trump's top aide 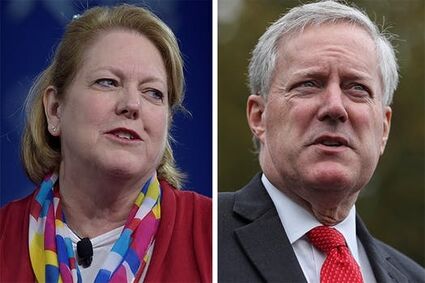 WASHINGTON - Virginia Thomas, a conservative activist married to Supreme Court Justice Clarence Thomas, repeatedly pressed White House Chief of Staff Mark Meadows to pursue unrelenting efforts to overturn the 2020 presidential election in a series of urgent text exchanges in the critical weeks after the vote, according to copies of the messages obtained by The Washington Post and CBS News.

The messages - 29 in all - reveal an extraordinary pipeline between Virginia Thomas, who goes by Ginni, and President Donald Trump's top aide during a period when Trump and his allies were vowing to go to the Supreme Court in an effort to negate the election results.

On Nov. 10, after news organizations had projected Joe Biden the winner based on state vote totals, Thomas wrote to Meadows: "Help This Great President stand firm, Mark!!!...You are the leader, with him, who is standing for America's constitutional governance at the precipice. The majority knows Biden and the Left is attempting the greatest Heist of our History."