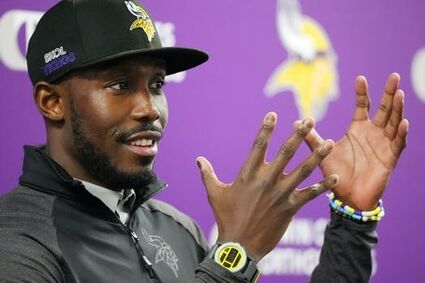 Vikings General Manager Kwesi Adofo-Mensah fielded questions from local reporters Wednesday for the first time since making several roster moves in the past week or so.

Under Vikings co-owner Mark Wilf's "super competitive" edict for the 2022 season, General Manager Kwesi Adofo-Mensah has been toeing the line of crafting a playoff-caliber roster while also putting the new leadership's stamp on the franchise.

So far, that means not much of an overhaul despite attempts to gauge trade interest on high-profile starters. Quarterback Kirk Cousins' contract was extended for another year for salary cap space. Nose tackle Michael Pierce was the lone starter released, while the free-agent signings of linebacker Jordan Hicks and edge rusher Za'Darius Smith likely mean free-agent linebacker Anthony Barr is not coming back.

The direction was labeled a "competitive rebuild" by Adofo-Mensah, who fielded questions from local reporters Wednesday for the first time since the roster moves began.