No negotiations on Wednesday as texts between district official, union president are publicized 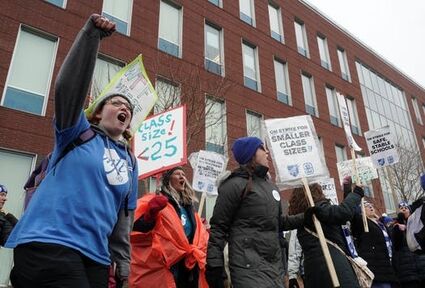 Minneapolis teachers and and support staff members continued their protest outside the Davis Education Service Center on Wednesday.

Minneapolis school district and union officials did not meet for in-person mediation on Wednesday after talks to end a teacher's strike now in its third week stalled the previous night. But the conflict continued to intensify.

District administrators said the union on Tuesday brought a counterproposal that was millions of dollars more costly than their previous offers - a sign of backwards movement, they said. Meanwhile, union leaders said they've come way down from previous teacher wage proposals and that district leaders were the ones who left the table Tuesday night.

Further fueling the clash: a publicized string of text messages between a union president and a member of the district's negotiating team. Also Wednesday, a group of just over two dozen students stayed at the district headquarters into the evening with a list of demands similar to those of the teacher's union, while a group of parents gathered in support of the district's position.