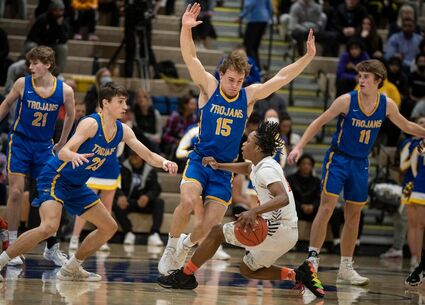 Hayfield (29-2) is back to defend its 2021 state championship. The Vikings' three leading scorers - senior Easton Fritcher and juniors Isaac Matti and Ethan Pack - were all starters a year ago. All three average in double figures, with Matti leading the way at 20.8 points per game. Fritcher is a Gophers baseball recruit.

East Grand Forks Sacred Heart is the only school in the field making its initial state tournament appearance. The Eagles (28-3) needed double overtime to slip past Cass Lake-Bena 69-67 in the Section 8 final. Senior guard Kobe Tomkinson, the program's career leading scorer, had 27 points in the game.

If you like scoring, the Cherry-Nevis matchup is a must see. Cherry (26-4) is the highest scoring team in the field, averaging 78.6 points per game. Nevis (27-3) isn't far behind at 74.4. Both teams have hit the century mark this season. Cherry, which set the school record for wins, is making its second state tournament trip and first since 1997. Nevis is 71-10 over the past three years.