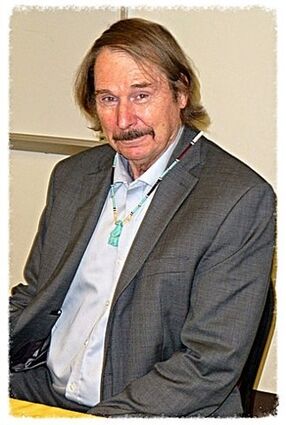 Denver, Colo., March 22, 2022- The American Indian College Fund has named Paul Robertson, President of Tohono O'odham Community College (TOCC) in Sells, Arizona, as its 2021-22 Tribal College and University Honoree of the Year for his dedication to tribal college education. President Robertson will receive a $1,200 honorarium sponsored by The Adolph Coors Foundation.

Robertson started his career as a social worker after a deployment in Vietnam. His tribal college education career began when he visited his brother, who was working at Oglala Lakota College in South Dakota. Robertson liked South Dakota and the TCU so much that he applied for a job there and was hired. He has been involved in Native higher education ever since.

"It was a rude awakening to find the conditions that existed there in the 1980s-not just the lack of social services-but the oppression of Lakota landowners who often lacked control over their own land," he said. That situation spurred Robertson to complete his dissertation on the colonial history of the reservation and to join his wife Eileen Iron Cloud in organizing efforts aimed at redressing grievances involving land, pollution, domestic violence, and treaty rights.

Robertson particularly enjoyed his role as a teacher. He developed courses that focused on human rights, including child abuse and neglect, decolonization and liberation, the power of the land, and the "Take the Black Hills Back" movement. The curriculum, informed by the precepts of Participatory Action Research, involved students in advocating for their communities. One successful effort involved a sit-in at the South Dakota state capital to protest the Blashfield Mural depicting the subjugation of Native peoples by white settlers under the banner of the "spirit of progress." The mural was covered soon after.

Robertson joined Little Priest Tribal College in 2010 and served as president for three years. After a stint as Chief of Operations at Sinte Gleska University, he joined TOCC in January of 2016, where he plans to stay until his retirement in 2023.

Robertson attributed TOCC's survival during the pandemic and its successful transition to 100% online education in the spring of 2020 to the groundwork laid through pro bono support from AIHEC's cyber team and the recommendations it made in 2018. TOCC was an early adopter of the cyber team's recommendations, which helped prepare the college for the unanticipated impacts of the pandemic. The CARES Act and other COVID-19 relief funds were also a lifeline. This combination of preparedness and federal funding positioned TOCC to extend its reach outside of the reservation borders to O'odham speakers in the Gila, Salt River, and Maricopa communities, and to a total of more than 55 tribal nations. In addition, TOCC also brought San Carlos Apache College (SCAC) under its wing. While SCAC students are TOCC students now, the 200-plus students at that campus will comprise the nucleus of SCAC when it achieves its own accreditation.

Thanks to these efforts and lowered tuition, more students in the TOCC communities can access higher education and have done so. TOCC's enrollment has quadrupled from fall of 2015 to its current enrollment in 2022. In fall 2015, 211 students were enrolled. In spring 2020, the number of enrolled students rose to 474. In fall 2021, the student body grew to 750 students. This semester, 900 students are currently enrolled.

Robertson attributed TOOC's popularity to many factors. One is the low cost of tuition. When Robertson became president, he cut the cost of tuition per credit hour in half-from $68.50 to $34.25. TOCC also committed to continuing the Tribal Nation's traditions, language, and culture. Students are engaged and pleased to take these courses, which relate back to their own experiences, Robertson said. Underlying all of that is TOCC's leadership and support network.

"This TCU is blessed with the generosity and continuous ongoing support of the Tohono O'odham Nation. TOCC is well-positioned because of the casinos the Nation has and the regular fiscal support from the Nation in ways that other TCUs may not enjoy," he said.

In addition to the Tribal Nation's investment in TOCC, Robertson said the stability of its board of trustees is critical to the college's success. "It [the board] stays the course, and members have never missed a meeting for lack of a quorum. Regular monthly meetings last three hours or longer, but the board is dedicated, and this makes my job easier."

That job includes adapting the school's offerings to a new type of student. During the pandemic, student demographics shifted, with the average age of O'odham students now being 34 years old and other students being 33 years old. Seventy-nine percent of students are female, 70% have children, and 52% are employed full time, with 20% working part time.

In addition to meeting students' academic and cultural needs, Robertson and his team work to provide students with programs that give them access to affordable higher education. These programs include transportation to in-person classes, online classes for a diverse student body, dorms for 32 full-time students, and free meals on campus.

In addition, to draw students back to campus in fall 2022, TOCC plans a variety of activities including volleyball, archery, stargazing, films, cultural events, and traditional harvests of desert plants.

"I think TCUs, despite the pandemic, are undergoing an efflorescence because of the support of institutions like the American Indian Higher Education Consortium (AIHEC) and the American Indian College Fund. President Lionel Bordeaux [of Sinte Gleska University on the Rosebud Reservation in South Dakota and an original TCU founder] said we need to rekindle the fire that existed at the time of our founding. I think the fire that President Bordeaux reminded us of is coming back," he said.

After retirement, Robertson hopes to teach as an adjunct professor and return to the writing projects he was planning before getting involved in TCU administration, which he said is an all-consuming enterprise.