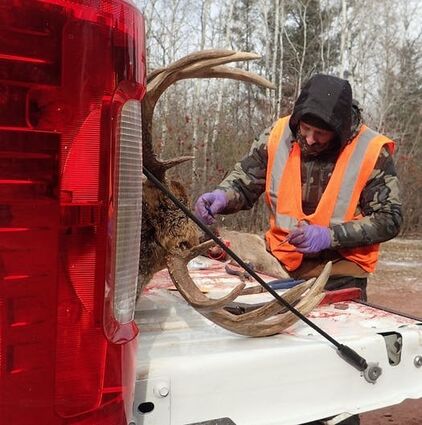 A Department of Natural Resources wildlife supervisor tagged a buck and a doe taken by a hunter to the mandatory CWD sampling station in Crosby in the late fall of 2019.

Minnesota wildlife officials will take a new, statewide approach to combat chronic wasting disease (CWD) in wild deer now that the always-fatal condition has been detected for the first time in a whitetail found dead in Grand Rapids.

"This new discovery doesn't make CWD a statewide problem, but it does mean we need to take more of a statewide approach,'' said Kelly Straka, wildlife section manager for the Department of Natural Resources (DNR).

Until now, the DNR has taken management actions to fight CWD by area, wherever and whenever the disease is detected. The tactics in those zones have included mandatory testing of hunter-killed deer to track the disease. In addition, the DNR organizes extra hunting to thin local herds. As part of the same playbook, the department bans deer feeding and attractants in areas where CWD is found. Deer can transmit the disease to each other when they are in close contact.