The district outlined its offer in a video Sunday, and the union countered with its own videos Monday 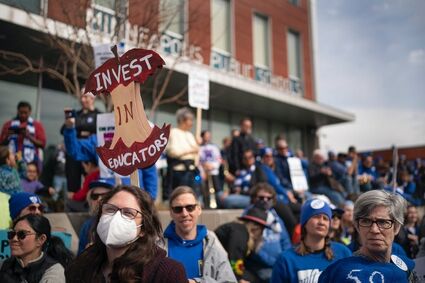 Minneapolis teachers, including Holly Thorsta, left, an art teacher at Roosevelt High, stood in silence as Native American leaders honored the land in front of the Davis Center. Monday marked the third school week of the teachers strike in Minneapolis.

Teachers union leaders on Monday balked at what Minneapolis Public Schools called its last and best offer for support staff, releasing their own series of videos and documents to explain some of their latest proposals to end the strike.

Monday marked the beginning of the third school week of the strike, which has kept 28,700 students out of classes since March 8.

The union continues to hold out for a $35,000 starting wage for its education support professionals (ESPs) - a priority it has maintained since the start of negotiations.