The man was shot after he chased after the suspects, according to police 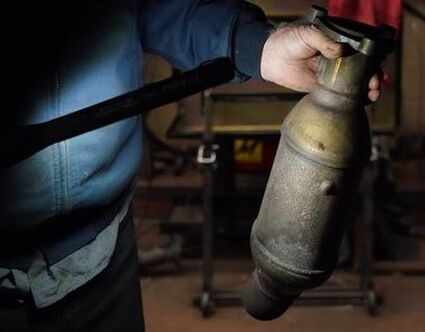 Catalytic converters are valuable for the metal, making them a target of thieves.

A motorist interrupted suspects trying to steal the catalytic converter from his vehicle over the weekend in St. Paul, then chased after them and was shot, police said Monday.

The gunfire, which occurred about 2:40 a.m. Sunday in the 1100 block of Marion Street, comes amid one of law enforcement's most vexing crimes to solve: the theft of converters that criminals covet for a quick-cash sale to scrap metal dealers, leaving vehicle owners with a hefty repair bill that can add up to thousands of dollars.

Officers spoke with a 56-year-old woman who told them her son had been shot, according to police. A short time later, Juan M. Ramirez, 23, of St. Paul, was driven by his sister to Regions Hospital with a noncritical gunshot wound to the chest. He was still hospitalized as of Monday afternoon.