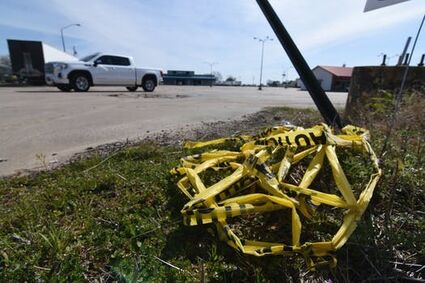 Crime scene tape lies on the ground, Sunday, March 20, 2022 at the scene where a shooting that left over 20 injured and one dead occurred Saturday night in Dumas, Ark.

DUMAS, Ark. - One man was killed and 27 people were wounded when two people got into a gunfight during a car show that's part of an annual community event in a small southeast Arkansas town, authorities said Sunday.

A person who left the scene of the Saturday evening shooting has been arrested on unrelated charges and is being questioned about the shooting in Dumas, a city of about 4,000 located about 90 miles (144 kilometers) southeast of Little Rock, Arkansas State Police Col. Bill Bryant said.

"All we know at this time, there was two individuals that got in a gunfight," Bryant said at a Sunday afternoon news conference.