Class 1A quarterfinal: Hayfield shows its fortitude in running its record to 32-0

Cass Lake-Bena, down double figures at halftime, led with 7:14 to play but could not hold on 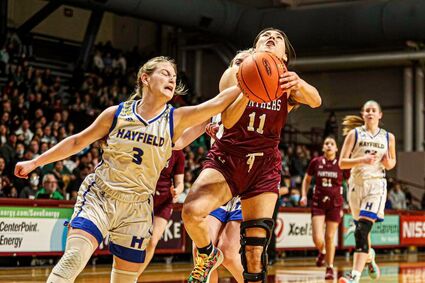 The Vikings endured for a 67-57 victory in the Class 1A state quarterfinals Thursday at Maturi Pavilion.

"We just say, 'From now on, we just want to go 1-0 every game,' " said Hayfield sophomore Natalie Beaver.

Staying in the moment was a tough task for both teams during an emotional game of runs.

No. 5 seed Hayfield (32-0), making its first state tournament appearance since 2008, overcame nerves and handled the pressure applied by No. 4 Cass Lake-Bena (28-3). The Panthers held an edge in experience after losing in the state quarterfinals last season.

The Panthers overcame a 39-26 halftime deficit to take a 47-46 lead with 7:14 remaining. Foul trouble landed Cass Lake-Bena's three leading scorers on the bench. But the substitutes helped the Panthers hold serve.

"They are skilled," Vikings coach Kasey Krekling said. "They have some guards that can get after you."

Freshman guard Gabrielle Fineday led the Panthers with 17 points. She gave her team a 53-52 lead with 3:59 remaining. Hayfield countered with big games from sophomore guard Kristen Watson (29 points) and Beaver (22). They combined for 13 points as the Vikings closed the game on a 15-4 run.

"There were times when we didn't look aggressive and we didn't look like ourselves and I just said, 'Let's go,' " Krekling said. "And you know what? They answered the call."

Not earning a seed in the Class 1A girls' basketball state tournament field bothered defending champion Minneota. A first-round game Thursday against top seed Mountain Iron-Buhl offered an outlet for the Vikings' frustrations.

"We were ready to prove something," Minneota senior forward Natalee Rolbiecki said.

Class 1A quarterfinal: Carlee Hanson's 25-point opening half closes the deal for Hancock 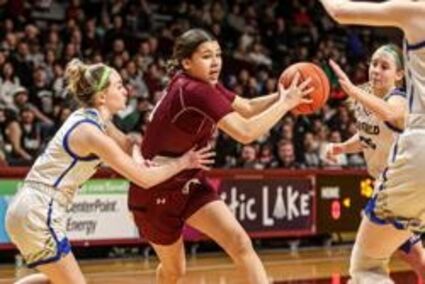 Hancock senior Carlee Hanson drained a three-pointer in the first half to extend her team’s lead to 19 points. Then she got a steal and a layup, another steal and another three-pointer. Her third steal and layup finished off her lightning-quick run, giving her 10 points in 47 seconds.

“I knew someone had to step up and do it,” Hanson said. “I had the hot hand, so I just kept going.”

She scored 25 of her 29 points in the first half, leaving no doubt about the 73-38 victory for No. 3 seed Hancock over Nevis in Thursday’s Class 1A girls’ basketball state tournament quarterfinals at Maturi Pavilion. Hancock will face Mayer Lutheran in the semifinals.