The governor's updated supplemental budget faces gridlock at the Capitol 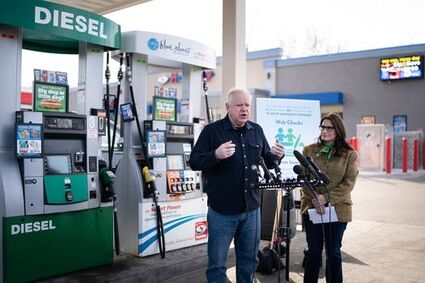 At a gas station in New Hope on Thursday, Gov. Tim Walz and Lt. Gov. Peggy Flanagan said they want to spend more of the projected state surplus on help for some retirees, improving the public health system and tax rebate checks.

Gov. Tim Walz on Thursday called for spending more of the state's record-breaking projected budget surplus on public health, a financial boost for some retirees and bigger tax rebate checks for millions of Minnesotans.

State leaders found out last month that they had an estimated surplus of nearly $9.3 billion that they could use in the current legislative session, a $1.5 billion jump from the previous forecast.

"We're seeing our economy, even at a time of turmoil, being resilient. One of the best things we can do for that economy and for families is put money into their pockets right now," the DFL governor said as he pitched boosting the sum of his suggested "Walz checks" in a revised supplemental budget proposal.