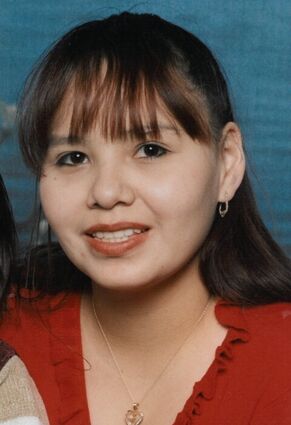 Leader Woman was born on February 24, 1978, in Red Lake, Minnesota, to Leonard Stately Jr. and Robyn Isham. She attended Red Lake High School, was Student of the Year as a junior, and also attended preparatory schools at Bemidji State University and at University of California at Berkeley, the first Native girl in that program. Leader graduated as Salutatorian and went on to graduate from Red Lake Nation College with an AA Degree. She later received training in the welding trade. Leader was proud of the time she worked as a welder and as a paraprofessional in the school system.

Leader was an artist, creating beautiful jewelry and beadwork, and even used her welding skill creatively. In her younger years, she was a jingle dress dancer. She is remembered as gracious and kindhearted, deeply loved by family and friends and all who knew her. Leader was strongly family oriented, loving her sisters and brothers, nieces and nephews, and especially her children and grandchildren. She often spoke with love of her father "Robin" and father-in-law Archie, with whom she shared a love of the Vikings before their passing. She had a "wicked sense of humor" and will be profoundly missed by her family and friends.

Arrangements are being provided by Whispering Pines Funeral & Cremation Service of Walker, Minnesota.