After one call late in the game, the official had his whistle ripped away and his shirt torn, according to the charges 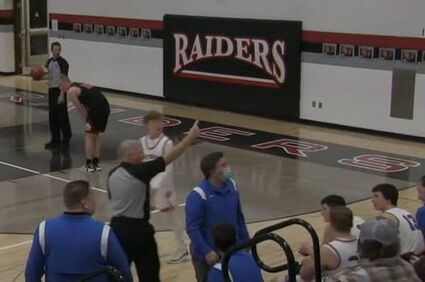 A referee ejected a fan late in the boys basketball game between Lake Park-Audubon and Win-E-Mac on Jan. 13.

A basketball fan became profanely irate over the officiating at a high school game in northwestern Minnesota, ripped the whistle off a referee and tore the referee's shirt before being ejected from the gym, according to a criminal complaint.

Phillip S. Lokken, 45, of Detroit Lakes is scheduled to appear in Becker County District Court on April 28 on misdemeanor assault and disorderly conduct charges in connection with the Jan. 13 incident during a boys game between host Lake Park Audubon High School and visiting Win-E-Mac High School.

Lokken was charged by summons. In response Tuesday to a request for comment about the charges, he told the Star Tribune, "It's not any of your [expletive] business what I did," but he went on to call his actions "a bad decision."