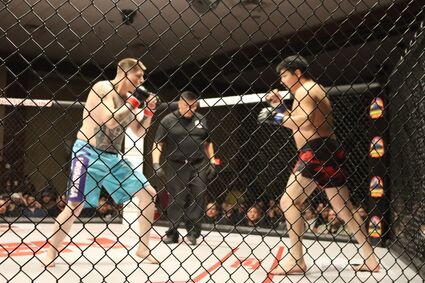 WALKER Minn. - On Saturday, Throne MMA hosted a 7-fight event to a sold-out crowd at the Northern Lights Casino on the Leech Lake Indian Reservation. Event promoters originally scheduled an 11-fight event on Saturday, February 5, but was rescheduled due to COVID-19 restrictions.

"Everyone in the crowd delivered, for sure," said Throne MMA Founder and Co-Owner Dean Lamb said to Native News Online.

Throne MMA is a Native owned and operated fight promoter based in Alexandria, Minnesota. Lamb is a citizen of the White Earth Band of Ojibwe and co-owner David Amitrano is a citizen of the Bois Forte Band of Ojibwe. Together, they host and organize a variety of fights throughout the region. Saturday's event is Throne MMA's second event; their first was hosted at the Northern Lights Casino in December 2021.