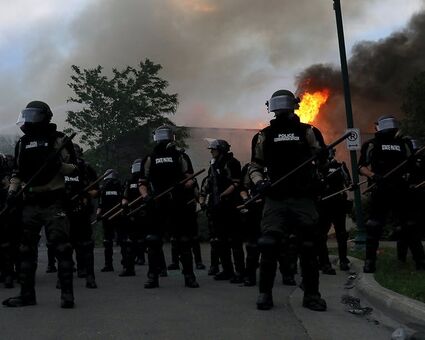 A long-awaited report is expected to provide insight into how Minneapolis agencies responded to the historic protests and unrest that followed George Floyd's killing in 2020. Pictured here, law enforcement officers amass to protect nearby firefighters as a blaze burns at Migizi, the Native American nonprofit in south Minneapolis, near the Minneapolis police Third Precinct on May 29, 2020.

Mayor Jacob Frey failed to implement the city's emergency protocols when responding to protests and riots that erupted across Minneapolis after George Floyd's murder, according to a long-anticipated report released Tuesday.

The 86-page report by Maryland-based risk management firm Hillard Heintze, whose research staff includes former law enforcement officers, details a breakdown in communications and planning that left residents feeling abandoned and city employees - including police - confused about who was in charge.

The report paints a damning picture of the 10 days in May 2020 that continue to traumatize many residents and employees nearly two years later: Some first responders, receiving little guidance from supervisors, traveled blindly into dangerous situations. Police made inconsistent decisions about when to use controversial munitions on crowds. Neighbors and business owners, frustrated by a lack of communication from city leaders, banded together to protect their homes and businesses.