US strikes harder at Putin, banning all Russian oil imports 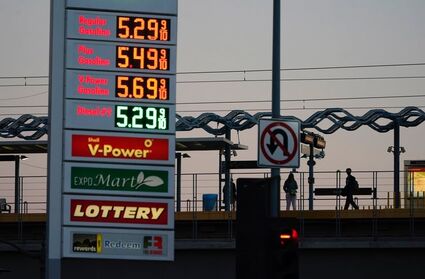 Gas prices are advertised at over five dollars a gallon, Feb. 28, 2022, in Los Angeles. Gasoline prices are rising again as talk grows about the United States banning imports of oil from Russia to punish the country for invading Ukraine. The national average price, Monday, March 7, 2022, jumped above $4.06 a gallon. Auto club AAA says that's the highest price that American motorists have faced since July 2008.

Americans will feel pain, too - at the gas pump - Biden acknowledged, declaring, "Defending freedom is going to cost."

The imports have been a glaring omission in the massive sanctions put in place on Russia over the invasion. Energy exports have kept a steady stream of cash flowing to Russia despite otherwise severe restrictions on its financial sector.