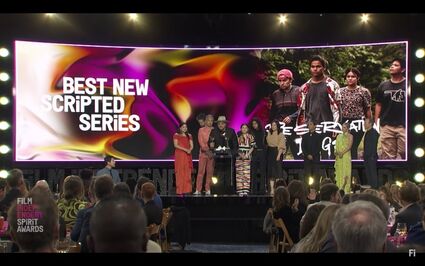 The all Indigneous cast and creators of the Hulu smash hit Reservation Dogs stood and embraced one another last night at the 2022 Film Independent Spirit Award Ceremony for their latest wins: Best Scripted Series and Best Ensemble Cast in a New Scripted Series.

The Film Independent Spirit Awards recognizes the top talent from film and television each year.

Reservation Dogs, written by Sterlin Harjo and Taika Waititi, is a television comedy series that follows four Indigenous teenagers who attempt to get to California by stealing, robbing and saving in rural Oklahoma. Every writer, director and series regular on the show is Indigenous, a first in Hollywood television history. The show streams exclusively on HULU.