Moose attacks two vehicles near Eveleth before being euthanized by authorities

DNR officials believe the animal may have had a neurological disorder 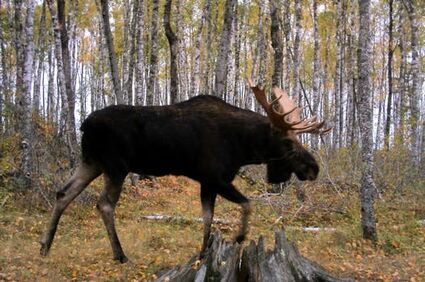 The image of this bull moose was captured by a trail camera.

DULUTH - A moose possibly struggling with a neurological disorder rammed a logger's truck and charged at least one other vehicle in northern Minnesota before state DNR officers tracked it down south of Eveleth and euthanized it last week.

The adult cow was shot, blood samples were quickly collected, and its 500- to 800-pound body was lifted into a truck with the help of the loggers' bulldozer. It was taken to the University of Minnesota's veterinary lab, according to Penny Backman, Minnesota DNR area wildlife supervisor.

The moose will be studied to determine what caused its abnormal behavior. Backman said officials believe it could be a tumor, an abscess or maybe brain worm.