Russia said early 500 of its troops have been killed and almost 1,600 wounded 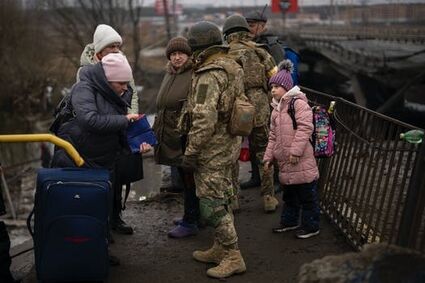 Ukrainian soldiers check people's identity cards as they flee their neighborhoods, on the outskirts of Kyiv, Ukraine, Wednesday, March 2. 2022.

KYIV, Ukraine - The number of people sent fleeing Ukraine by Russia's invasion topped 1 million on Wednesday, the swiftest refugee exodus this century, the United Nations said, as Russian forces kept up their bombardment of the country's second-biggest city, Kharkiv, and laid siege to two strategic seaports.

The tally from the U.N. refugee agency released to The Associated Press amounts to more than 2 percent of Ukraine's population being forced out of the country in less than a week. The mass evacuation could be seen in Kharkiv, where residents desperate to get away from falling shells and bombs crowded the city's train station and tried to press onto trains, not always knowing where they were headed.

In a videotaped address, Ukrainian President Volodymyr Zelenskyy called on Ukrainians to keep up the resistance. He vowed that the invaders would have "not one quiet moment" and described Russian soldiers as "confused children who have been used."