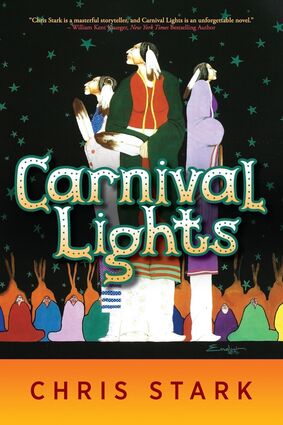 "Carnival Lights" blends Minnesota history with a Native perspective, shining a necessary light on the commoditization and abuse of Native women

Blending fiction and fact, "Carnival Lights" ranges from reverie to nightmare and back again in a lyrical yet unflinching story of an Ojibwe family's struggle to hold onto their land, their culture and each other. Set in a summer of hippie Vietnam War protests and the moon landing, "Carnival Lights" also provides a narrative history of Minnesota. The novel spans settler arrival in the 1800s, the creation of the reservation system and decades of cultural suppression, connecting everything from lumber barons' mansions to Nazi V-2 rockets to smuggler's tunnels.

"Carnival Lights" is timely, with its debut following national news headlines surrounding the abuses of Native boarding schools and an increasing awareness of the Missing and Murdered Indigenous Women crisis, but is also a timeless account of the obstacles facing Indigenous communities.

"This novel illustrates the history of abuse of Native people and highlights the impacts of generational trauma. Broken treaties created vulnerabilities that left Native women and youth exposed to and at risk of being victims of sex trafficking," says Stark. "'Carnival Lights' is a story about intergenerational Indigenous love. It's a book for a country in need of deep healing."

The annual Minnesota Book Awards, organized by The Friends of the Saint Paul Public Library and presented this year by sponsor Education Minnesota, is a program that connects readers and writers throughout the state and celebrates books created by Minnesotans. Carnival Lights is named a finalist in this year's Novel and Short Story category.

Finalists for this year's awards were selected by 27 judges from around the state. Judges include writers, teachers, librarians, booksellers, and others from the literary community in Minnesota. Award winners will be announced at the 2022 Minnesota Book Awards Ceremony on Tuesday, April 26, at Ordway Center for Performing Arts.

About the Minnesota Book Awards

The Minnesota Book Awards is a year-long program of The Friends of the Saint Paul Public Library that connects readers and writers throughout the state with the stories of our neighbors. The process begins in the fall with book submissions and continues through winter with two rounds of judging. Winners are announced at the Minnesota Book Awards Ceremony each spring. Woven throughout the season are events that promote the authors and connect the world of Minnesota books – writers, artists, illustrators, publishers, editors, and more – to readers throughout the state. In recognition of this and its other statewide programs and services, the Library of Congress has recognized The Friends of the Saint Paul Public Library as the state's designated Center for the Book. For more information visit thefriends.org/mnba.

About The Friends of the Saint Paul Public Library:

The Friends of the Saint Paul Public Library acts as a catalyst for libraries to strengthen and inspire their communities. An independent, nonprofit organization established in 1945, The Friends invests in the Saint Paul Public Library through fundraising, advocacy, and programming; as a result, our Library is a nationally-recognized leader in serving its community. The Friends also serves libraries across the country and internationally through its consulting services, Library Strategies, and promotes literacy, reading, and libraries statewide as the Library of Congress's designated Minnesota Center for the Book. For more information, contact The Friends at 651-222-3242 or visit thefriends.org.

Chris Stark is a Native (Anishinaabe and Cherokee) award-winning writer, researcher, visual artist, and national speaker. Her second novel, Carnival Lights, is about two Ojibwe teen girls who leave their reservation for Minneapolis, set in 1969. Her first novel, Nickels: A Tale of Dissociation, was a Lambda Literary Finalist. Her essays, poems, academic writing, and creative nonfiction have appeared in numerous publications, including The Palgrave International Handbook on Trafficking, University of Pennsylvania Law Review, Dignity Journal, The WIP, Florida Review, The Chalk Circle: Intercultural Prize-Winning Essays, When We Became Weavers: Queer Female Poets on the Midwest Experience, Hawk and Handsaw: The Journal of Creative Sustainability, and many others. Her poem "Momma's Song" was recorded by Fred Ho and the Afro Asian Music Ensemble as a double manga CD. She is also a co-editor of Not for Sale: Feminists Resisting Prostitution and Pornography and a co-author of the ground-breaking research "Garden of Truth: The Prostitution and Trafficking of Native Women in Minnesota." Primary research she conducted with Native women survivors of prostitution and trafficking on the ships in Duluth, Minnesota, is included in her article "Strategies to Restore Justice for Sex Trafficked Native Women." She is also co-author and co-researcher of "Evidence of Survivor, Agency, and Researcher Collaboration: An Example of an Emerging Model of Survivor Wellbeing."

Her writing has been nominated twice for a Pushcart Prize. In 2012, she was named a "Changemaker" by the Women's Press and was a Loft Series Mentor Finalist. In 2019, she received the International Social Justice Citizen Award from the International Leadership Institute. She has appeared in numerous media, including NPR, MPR, PBS, Justice Talking, and Robin Morgan's radio show. She has spoken at law schools, conferences, rallies, and at the United Nations (four times). She has taught writing and humanity courses at universities and community colleges for twenty years and worked as a Two-Spirit program director at Minnesota Indian Women's Resource Center. Currently, she consults with a variety of local and national organizations and teaches writing at Central Lakes Community College. She is a member of the Minnesota Missing and Murdered Indigenous Women Taskforce. She has an MFA in writing and an MSW. For more information, visit christinestark.com.