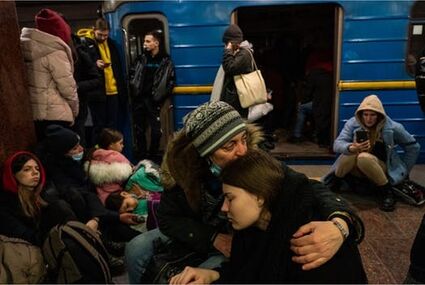 Hundreds of people took shelter inside a downtown Kharkiv, Ukraine, metro station as explosions are heard outside on Thursday.

KYIV, Ukraine - Russia pressed its invasion of Ukraine to the outskirts of the capital Friday after unleashing airstrikes on cities and military bases and sending in troops and tanks from three sides in an attack that could rewrite the global post-Cold War security order.

Explosions sounded before dawn in Kyiv as Western leaders scheduled an emergency meeting and Ukraine's president pleaded for international help. The nature of the explosions was not immediately clear, but the blasts came amid signs that the capital and largest Ukrainian city was increasingly threatened following a day of fighting that left more than 100 Ukrainians dead.

Ukraine President Volodymyr Zelenskyy said the government had information that "subversive groups" were encroaching on the city, and U.S. Secretary of State Antony Blinken said Kyiv "could well be under siege" in what U.S. officials believe is a brazen attempt by Russian President Vladimir Putin to dismantle the government and replace it with his own regime.