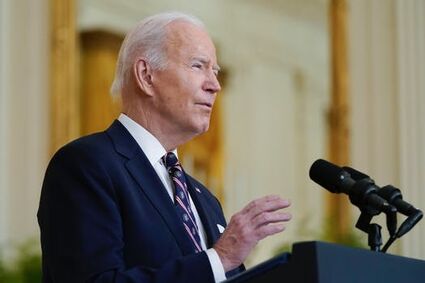 President Joe Biden spoke about Ukraine in the East Room of the White House on Tuesday. He said he is moving additional U.S. troops to the Baltic states on NATO's eastern flank bordering Russia.

MOSCOW - The East-West faceoff over Ukraine escalated dramatically Tuesday, with Russian lawmakers authorizing President Vladimir Putin to use military force outside his country and U.S. President Joe Biden and European leaders responding by slapping sanctions on Russian oligarchs and banks.

Both leaders signaled that an even bigger confrontation could lie ahead. Putin has yet to unleash the force of the 150,000 troops massed on three sides of Ukraine, while Biden held back on even tougher sanctions that could cause economic turmoil for Russia but said they would go ahead if there is further aggression.

The measures, accompanied by the repositioning of additional U.S. troops to the Baltic nations on NATO's eastern flank bordering Russia, came as Russian forces rolled into rebel-held areas in eastern Ukraine after Putin said he was recognizing the independence of the separatist regions in defiance of U.S. and European demands.