Valpo Women's Basketball Takes Down Evansville in OT on Friday 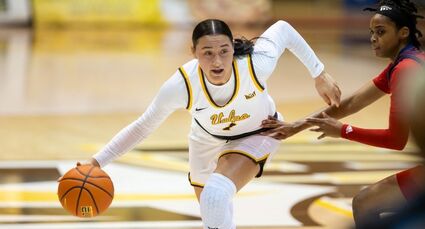 Maybe it was only appropriate, given that the normal five-hour bus trip the day before had taken nearly 12 hours to complete, that Friday's Valpo women's basketball game at Evansville would take a little longer than normal to decide a victor. After 40 minutes proved to not be enough, the Beacons' defense locked down in overtime, holding the Purple Aces scoreless over the last three and a half minutes as Valpo claimed a key 75-70 victory.

• Five different Valpo players scored as part of a 12-4 stretch over the opening 5:39 of the game.

• Evansville responded with the next seven points, and the Beacons' lead was one point at 14-13 at the end of the first quarter.

• The Purple Aces took the lead on their first possession of the second quarter and held it for the vast majority of the period, pushing their edge to as many as five points

• Evansville led 26-22 with two and a half minutes to play in the first half, but Valpo came up with baskets on each of its final four possessions of the half - including two from Shay Frederick (Greenville, Wis./Hortonville) - to pull ahead 30-28 at intermission.

• Valpo came out strong to start the second half as well, scoring on each of its first four possessions of the third quarter - making it points on eight straight trips spanning either side of halftime - to start the half on a 9-0 run.

• Olivia Brown (East Grand Rapids, Mich./East Grand Rapids [St. Bonaventure]) had five points during the spurt, capping it with a triple to make it 39-28 Valpo with 7:40 to play in the quarter and forcing an Evansville timeout.

• Valpo's advantage was still in double figures approaching the halfway point in the period before the Purple Aces strung together 11 straight to retake the lead, 42-41 with 3:20 left in the quarter.

• The teams combined to make five consecutive shots over the final 90 seconds of the third quarter, three of those Valpo baskets and two of those drives and finishes from Carie Weinman (Glenview, Ill./Glenbrook South [Denver]) to give the Beacons a 50-48 lead with 10 minutes remaining in regulation.

• The fourth quarter was contested entirely within a six-point span, and was within one possession for the vast majority of the period.

• Evansville led 63-60 as the clock ticked under three minutes. Brown hit two free throws to make it a one-point game with 2:50 remaining, but the Purple Aces answered with a basket on the other end. Weinman hit a clutch 3-pointer with 1:59 to go to briefly tie the score, but again Evansville responded, this time with a triple of its own.

• Valpo had two shots miss the mark on its next offensive trip, but a travel on the Purple Aces returned possession to the Beacons with 38 seconds to go. Frederick came up with the huge shot on the offensive end, drilling a 3-pointer with 23.2 seconds remaining in regulation to tie the game, 68-68. Evansville missed its attempt at the game-winner in the final seconds, sending the game to overtime.

• It was a ragged start to overtime for both teams. Evansville got to the free throw line on each of its first two possessions, splitting a pair both times, and the Beacons had a split at the line with 3:20 remaining to make it a 70-69 game.

• Valpo switched to a zone defense on the ensuing Purple Aces possession, and the defensive switch worked to perfection, as Evansville ended up running the shot clock nearly all the way down on each of its next three trips and missed shots on all three.

• Meanwhile, while that was happening, the Beacons took the lead for good with 2:04 to play on a pair of free throws from Frederick. On the next trip, Frederick hit Grace White (Redby, Minn./Red Lake [Denver]) with a perfect pass on a great basket cut for an easy layup to make it 73-70 with 1:07 remaining.

• The Purple Aces gave the ball back on a travel on their trip down the floor, and Frederick hit two free throws with 27.4 seconds to play to put away the game.

• Friday marked the first time this season that Valpo has played an overtime game, one season after playing four extra sessions.

• The win keeps Valpo in a tie for fifth place with Loyola, and two games up in the wins column over seventh-place Indiana State.

• Frederick paced the Beacons on Friday and was one point shy of her season high with 18 points, including a perfect 6-for-6 effort from the foul line. The senior also tied for game-high honors with seven assists.

• Weinman delivered 16 points off the bench and came up with three steals as well.

• Brown rounded out the trio of Valpo players in double figures with an efficient 14 points, going 4-for-5 from the floor, 2-for-3 from 3-point range and 4-for-4 from the foul line.

• White neared a triple-double on Friday with eight points, 11 rebounds and seven assists. Her rebounding and assist marks both matched career bests.

• Valpo shot an uncharacteristic 5-for-26 (19.2%) from 3-point range, its worst shooting percentage from deep in a victory this season. The Beacons made up for it by hitting 21-for-31 from inside the 3-point line.

• Valpo enjoyed a 38-28 advantage on the glass, the second time this season it has been double figures to the good in the rebounding margin department. The Beacons grabbed 11 offensive boards and converted those into an 11-2 edge in second chance points.

• Valpo has now alternated wins and losses in 11 consecutive games.

Valpo (9-16, 7-7 MVC) has another critical game on Sunday afternoon when it takes on Indiana State in Terre Haute. Tipoff is slated for noon CT, and the game can be seen live on ESPN+.