A new program would provide free tuition, bonuses and other incentives to attract high school and college graduates to law enforcement 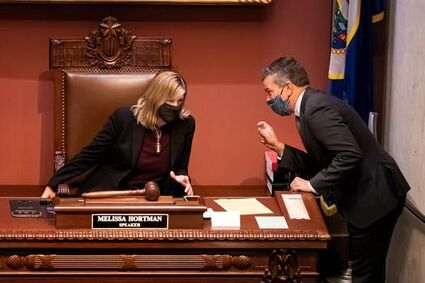 House Majority Leader Ryan Winkler, speaking with House Speaker Melissa Hortman on the floor, says the bill is the product of conversations with law enfocement.

The program, outlined in legislation that a group of House and Senate Democrats unveiled Monday, would provide free tuition, job placement assistance, signing and retention bonuses and other incentives to "highly qualified" high school and college graduates who pursue law enforcement training through the Minnesota State system.

"We have put together a bill that is built on the premise that Minnesota can recruit, can hire, can train and can retain the kinds of police officers who reflect our communities' values," said House Majority Leader Rep. Ryan Winkler, DFL-Golden Valley.