The U.S. and E.U. threatened new sanctions against Russia 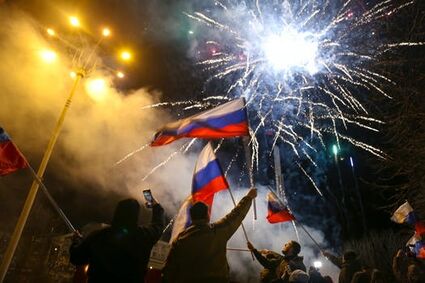 People wave Russian national flags celebrating the recognizing the independence in the center of Donetsk, the territory controlled by pro-Russian militants, eastern Ukraine, late Monday, Feb. 21, 2022. In a fast-moving political theater, Russian President Vladimir Putin has moved quickly to recognize the independence of separatist regions in eastern Ukraine in a show of defiance against the West amid fears of Russian invasion in Ukraine. (AP Photo/Alexei Alexandrov)

MOSCOW - A long-feared Russian invasion of Ukraine appeared to be imminent Monday, if not already underway, with Russian President Vladimir Putin ordering forces into separatist regions of eastern Ukraine.

A vaguely worded decree signed by Putin did not say if troops were on the move, and it cast the order as an effort to "maintain peace." But it appeared to dash the slim remaining hopes of averting a major conflict in Europe that could cause massive casualties, energy shortages on the continent and economic chaos around the globe.

Putin's directive came hours after he recognized the separatist areas in a rambling, fact-bending discourse on European history. The move paved the way to provide them military support, antagonizing Western leaders who regard such a move as a breach of world order, and set off a frenzied scramble by the U.S. and others to respond.