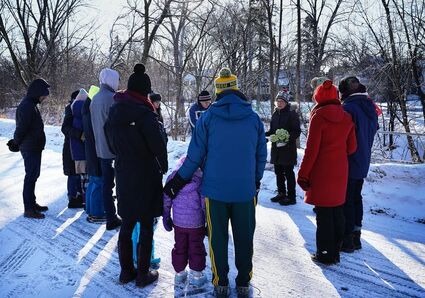 Neighbors including Mary Gitschier McCarthy, with flowers, held a memorial service Sunday for a man who was found dead in a south Minneapolis storm drain tunnel along Minnehaha Creek in Minneapolis. About 15 people showed up in near-zero-degree temps to honor the life of the man who little was known about, including his name.

Jake Matlock's two sons grew up playing along Minnehaha Creek. On Feb. 6, with the creek bed frozen over, they donned their headlamps and went to explore the storm tunnel that drains into the creek at 5th Ave. S. and Minnehaha Parkway. About 10 minutes up the passage, whose cobbled mouth can be glimpsed from the parkway, they found the body of a man.

They called 911, and the elder boy, 16, led emergency medical personnel to the body.

"We didn't know anything else about him, but the firefighters said that it looked like there was no sign of trauma or foul play, and that he looked like he had simply frozen to death," Matlock said.