Under pressure to ease up, Biden weighs new virus response 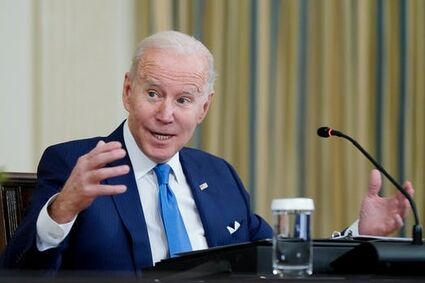 President Joe Biden is waiting for fresh guidance from federal health officials, who so far still recommend that nearly all Americans wear masks in most indoor settings.

WASHINGTON - Facing growing pressure to ease up on pandemic restrictions, the White House insisted Wednesday it is making plans for a less-disruptive phase of the national virus response. But impatient states, including Democratic New York, made clear they aren't waiting for Washington as public frustration grows.

Gov. Kathy Hochul announced that New York will end its COVID-19 mandate requiring face coverings in most indoor public settings - but will keep it for schools. Illinois announced the same.

Earlier this week, New Jersey, Connecticut and Delaware all disclosed plans to join states that have lifted or never had mask requirements for their schools, and Massachusetts will follow suit at the end of the month. All but Massachusetts have governors who are Democrats, like President Joe Biden.