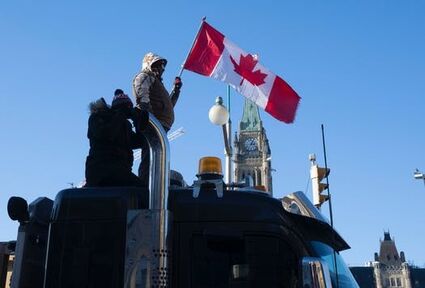 Protesters stood on top of a truck parked in front of the Parliament buildings during a demonstration against COVID-19 restrictions, in Ottawa, Ontario, Saturday, Feb. 5, 2022.

TORONTO - The mayor of Canada's capital declared a state of emergency Sunday and a former U.S. ambassador to Canada said groups in the U.S. must stop interfering in the domestic affairs of America's neighbor as protesters opposed to COVID-19 restrictions continued to paralyze Ottawa's downtown.

Mayor Jim Watson said the declaration highlights the need for support from other jurisdictions and levels of government. It gives the city some additional powers around procurement and how it delivers services, which could help purchase equipment required by frontline workers and first responders.

Thousands of protesters descended in Ottawa again on the weekend, joining a hundred who remained since last weekend. Residents of Ottawa are furious at the nonstop blaring of horns, traffic disruption and harassment and fear no end is in sight after the police chief called it a "siege" that he could not manage.