A deal with the offensive coordinator cannot be completed until after the Super Bowl on Feb. 13 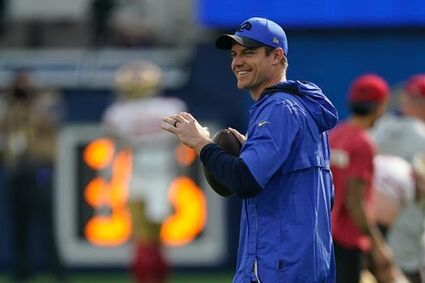 The Vikings chose Kevin O'Connell, 36, to be the 10th head coach in franchise history after conducting a second interview in Los Angeles with him on Monday.

The Vikings plan to hire Rams offensive coordinator Kevin O'Connell to be the 10th head coach in the franchise's 61-year history, according to two sources with knowledge of the situation.

A deal with O'Connell cannot be completed until after Los Angeles plays the Cincinnati Bengals in the Super Bowl on Feb. 13. But the Vikings on Wednesday night had begun informing the other finalists in their coaching search they would not get the job, sources said.

The Vikings spent most of Wednesday interviewing Michigan head coach Jim Harbaugh but never made him a job offer, a source with knowledge of the discussions said. According to multiple news media reports, Harbaugh has informed Michigan he is returning to the school.