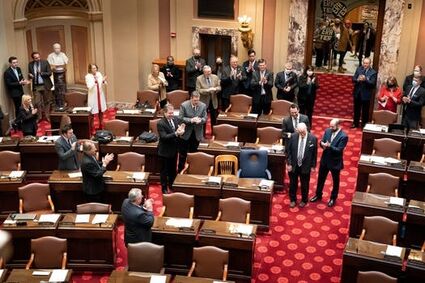 Sen. David Tomassoni, DFL-Chisholm, was helped into the Senate chamber by his two sons, Dante, left, and Dan, on Monday. Tomassoni, who suffers from ALS, received a standing ovation from senators and staff.

Minnesota lawmakers began their third legislative session in the shadow of COVID-19 on Monday, with pledges from both sides of the aisle to address statewide anxieties around rising crime, a strained education system and the health and economic fallout of the pandemic.

"Today we start by recognizing how hard and unsettling these past two years have been for all of us," Senate Minority Leader Melisa López Franzen said during a morning news conference alongside her Senate DFL colleagues. "Every Minnesota family, community and business has been hit hard by the deadly pandemic that has upended our economy and strained our public health, our long-term care and our child-care systems to the brink. And Minnesotans are feeling it."

DFL Gov. Tim Walz and both parties in the divided Legislature have outlined lengthy - and at times dueling - lists of priorities in recent weeks, many signaling how leaders want to spend a projected $7.7 billion surplus. On the table are proposals for tax cuts, infrastructure borrowing, front-line worker bonuses, improving education outcomes, expanding access to affordable housing, reducing child-care and health care costs and tackling violent crime.