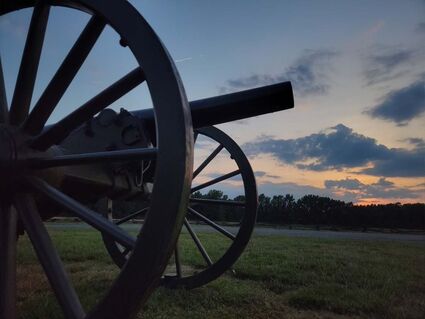 WASHINGTON - The National Park Service's American Battlefield Protection Program (NPS ABPP) today awarded $1,114,358 in Battlefield Land Acquisition Grants to the City of Parkers Crossroads in Tennessee, Kershaw County South Carolina, North Carolina Department of Natural and Cultural Resources, and Virginia Department of Conservation and Recreation. The awards protect 70.2 acres of American Revolutionary War and Civil War battlefields and are made possible by the Land and Water Conservation Fund, which reinvests revenue from offshore oil and natural gas leasing to help strengthen conservation and recreation opportunities across the nation.

"These grants to state and local governments represent an important investment in public-private conservation efforts across America," said NPS Director Chuck Sams. "They ensure that future generations have access to green spaces and can reflect on our collective history."

The award to the North Carolina Department of Natural and Cultural Resources supports their ongoing partnership with the American Battlefield Trust to preserve the Bentonville Battlefield. With this grant, the state of North Carolina will add 34 acres to the Bentonville Battlefield State Historic Site. ABPP's Battlefield Land Acquisition Grants have supported the purchase of nearly 262 acres of the Bentonville Battlefield since 2017. The Battle of Bentonville was one of the last full-scale offensive actions by the Confederate army against Union forces during their 1865 march through the Carolinas. Today the site is part of North Carolina's planned Mountains-to-Sea Trail that will connect cities and towns with historic sites, natural areas, and scenic districts across the state. This award reflects the NPS's commitment to support the Biden-Harris administration's America the Beautiful initiative, a nationwide effort to conserve and restore 30% of our nation's lands, waters, and wildlife by 2030.

Battlefield Land Acquisition Grants are available on a rolling basis. To learn more about how to apply, head to NPS ABPP's website. For questions about NPS ABPP's grants, contact the program at abpp@nps.gov.

Virginia Department of Conservation and Recreation Battle of Trevilian Station

About the National Park Service. More than 20,000 National Park Service employees care for America's 423 national parks and work with communities across the nation to help preserve local history and create close-to-home recreational opportunities. Learn more at http://www.nps.gov, and on Facebook, Instagram, Twitter, and YouTube.